Stephen Colbert made an obscene joke. Attacking Trump for his treatment of a well respected CBS journalist, Colbert implied Trump was subservient to Russian strongman, Vladimir Putin. He did so in rather crass terms.

“. . . you [Trump] talk like a sign language gorilla who got hit in the head. In fact, the only thing your mouth is good for is being Vladimir Putin’s cockholster.”

The oral sex reference caused a backlash with the predictable hashtag #firecolbert. The impulse to remove Colbert might seem obvious. But objections to the comedian’s “obscene” monologue are not coming from the voices we might expect: media outlets focused on gay rights. 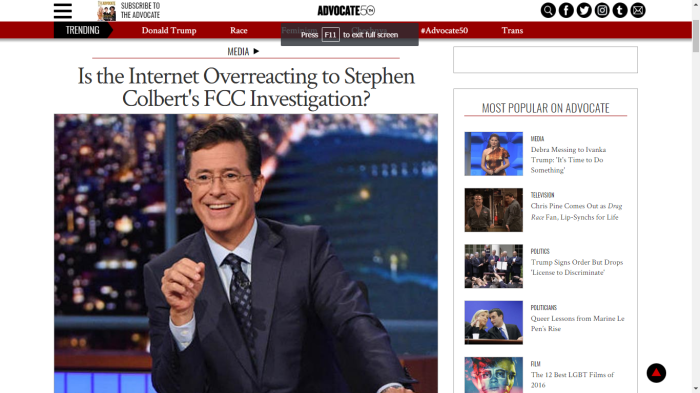 The week after Colbert’s monologue, Out had published little on the issue. The Advocate‘s fleeting coverage framed the outrage as driven by the right, noting how “[c]onservatives alleged the joke was homophobic.” They credit Trump supporters for the FCC filings as well as the hashtag #FireColbert trend on Twitter. Instinct staff focused on the damage the monologue did to Trump and prompted readers to question if the comment was indeed homophobic. “Or, is it just correctly using the anatomy of the two people involved? Do you think Colbert would have called Trump a cunning linguist if the leader of Russia was a female?” In these leading publications, there is little outright ire or condemnation of the comedian.

Mainstream publications are more critical. Time magazine weighed in with its humorless and clinical take on Colbert’s political comedy. Journalist Daniel D’Addario criticized Colbert’s mockery of the president as a “controversial monologue in which he directed a homophobic slur at the President.” Over at Vox, @germanrlopez tried to spell out out how Colbert’s joke was worth offense.

“. . . the only way this works as a joke is by demeaning gay people. The underlying implication here is that gay relationships are somehow extra funny — that Trump engaging in sexual acts with Putin is hilarious because it’s gay.”

The Washington Post, too, was scathing in its treatment of Colbert’s reliance on homosexuality as gag. In a Wapo perspective piece, Craig Konnoth admits “[c]omedy is an effective means of protesting the new administration. But” he says, “these particular jokes rest on homophobic assumptions.” Konnoth recognizes Colbert’s public expressions of support for LGBTQ communities but is quick to shoot down the idea that political support grants a pass on using homosexuality as a punch line. He goes on to point out the implied insult in putting Trump in a submissive, feminine posture to make the point about his relationship to Russia. This, he argues, sends a harmful message about gender:

“It teaches kids that making gay jokes about classmates who are a little too friendly is all right. It tells conservatives and Trump supporters that gay jokes are funny — and that being gay is, indeed, being weak.”

Responding in Wednesday’s monologue, Colbert seemed to answer critics focused on homophobia at the root of the joke. He clarified his view of freedom to love.

“But I just want to say, for the record, life is short, and anyone who expresses their love in their own way is to me an American hero. I think we can all agree on that.”

A review of tweets and memes complicates a easily-offended-liberal, snowflake narrative. The push to oust Colbert awkwardly mixes the defense of LGBTQ folks with a more predictable right-leaning internet verbiage. For example, a #firecolbert meme refers to Sen. Elizabeth Warren as Pocahontas, an insulting nickname for the liberal senator from Massachusetts, a frequent target of conservative commentators. 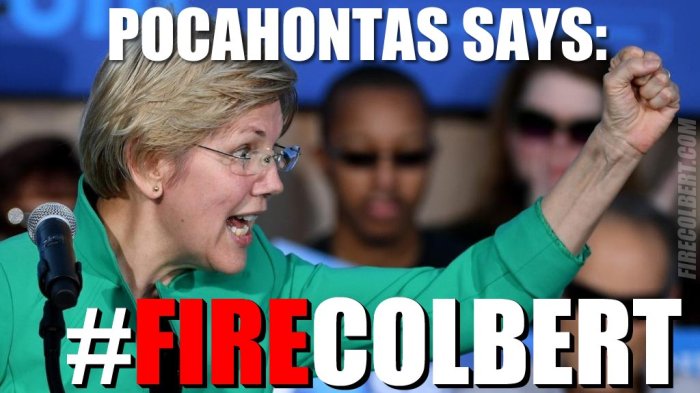 The response to Colbert’s assault on all things Trump cuts across a common political divide. Criticism mixes the conservative’s outrage at indecency directed at the president and the liberal’s outraged defense of social minorities. Often, these are separate public segments being outraged, but not always:

Stephen Colbert is being investigated by the Federal Communications Commission for his disgusting homophobic remarks. Good! #FireColbert

The complaints to the FCC will go nowhere. Why? Because the First Amendment protects against silencing critical voices. But there is a competing vision of liberalism that has less tolerance for free speech. It is the liberalism that leads many to criticize college campuses and triggers twitter wars over offensive language targeting unprivileged social groups.

Identity politicking can serve to defend a president who is openly hostile to dissent and minority justice. We see less animosity from social groups who “should” be concerned about slandering gay life. Instead, Colbert’s critics are nested in mainstream media and conservative corners on social media.

In these conservative corners, voices on the right complain of liberal hypocrisy. Liberals level accusations of homophobia and sexism only when conservatives show cultural insensitivity, they argue. But the claim of hypocrisy ignores the larger political context of how we take offense as a public.

Though “illiberal” tendencies on college campuses have made headlines recently, the response to Colbert is more complicated. Political conservatives with sympathies for the LGBTQ community may have already been turned off by Colbert’s increasingly political Late Night act. At once, Colbert’s poor joke choices provide opportunistic fodder for conservatives to reject the anti-Trumpism that has proven a ratings success.

In some ways, this backlash mirrors an earlier burst of hashtag activism in response to Colbert’s farcical rightwing character from The Colbert Report years earlier. Colbert’s character displayed clear insensitivity toward Asians by announcing an offensively named foundation to support Asian communities. The satire was lost on many critics who created #cancelcolbert in response. They, too, sought to undermine the advertising base of the show rather than expecting the FCC to challenge (and censor) programming content.

So, while legal protections will allow Colbert to continue hammering away at the 45th president, another form of censorship remains a threat. Social censorship is the non-legal form of policing speech. Instead of legal action, socio-commerical censorship can have a potent effect on free speech. If a voice we disagree with does not violate law, the power of group pressure, hashtags and boycott movements can step in. Even when advertising revenue is not immediately threatened, media outlets can shy away from certain voices that do not fit the long term branding. Glenn Beck and, more recently, Bill O’Reilly, have suffered as advertisers withdraw from controversial media figures.

The impulse to silence objectionable voices is paradoxical. We celebrate the empowerment of public voices through new media tools, but what happens when online communities rally against the speech of others?  Boycott and #cancel movements are a valuable tool for audience empowerment in the age of social media, but the pressure of public opinion may not always be the best mediator. Social pressures put important limits on public discourse. This is why Holocaust deniers are not consulted as experts on CNN. But the function of social censorship also cultivates ideological homogeneity. The public is supposed to learn from the media environment, but increasingly, that does not happen.