This is the simplified argument of Neil Postman, the quasi-famous cultural critic of the 1980s. Postman looked at television and saw a medium of great potential. The entertainment tv offered its audience was unparalleled. TV gave us live images from around the world. The spectacle was amazing. TV took families from their daily lives and transported us to 1000s of imaginary worlds. We escape the grind of paying bills, family squabbles and workdays through TV. But, Postman argued, TV is also supremely ill-suited for the “serious stuff” of news and public affairs.

Many are concerned about fake news on Facebook, but what is the alternative? A return to CBS network news? Should we look to cable’s CNN? Reanimate Walter Cronkite?

Sad news, folks. If Facebook hurts an informed electorate, network and cable news are handmaidens in the erosion of American political intelligence. Let’s look at CBS and CNN for evidence.

Three Pieces of Evidence Commercial News Will Fail Us

CBS chairman, Les Moonves, commented on the relationship between commercial media and Trump’s campaign. “It may not be good for America, but it’s damn good for CBS,” he said, candidly. He continued, “[m]an, who would have expected the ride we’re all having right now? . . . The money’s rolling in and this is fun.” Speaking to CBS stockholders, Moonves was pleased with the “circus.” “I’ve never seen anything like this, and this is going to be a very good year for us. Sorry. It’s a terrible thing to say. But, bring it on, Donald. Keep going.”

If a skeptical reader thinks one statement from a media executive is not enough, here is some evidence that Moonves’s reckless commercialism is the operational logic for the American commercial news.

Trump received excessive coverage from news organizations. These breathless and bemused reports function as free publicity (“Earned Media”), keeping the Trump campaign in control of the news narrative. Researchers estimate commercial news offered what amounted to $2-3 billion in free advertising for Trump. Who says you are wasting time with those 2AM tweets? It worked for the president. 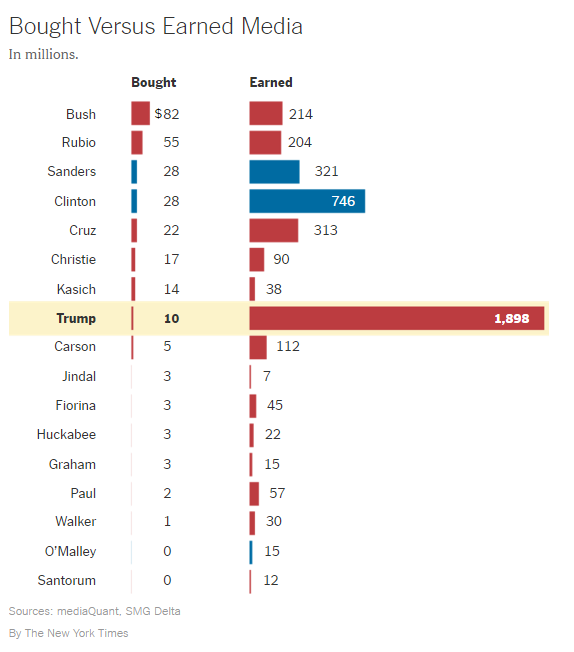 The “Moonves doctrine” is quite influential. So much so that news directors preferred no news over actual news. During the 2016 campaign, CNN, Fox and MSNBC broadcast an empty Trump podium while Mrs. Clinton was actually speaking to unions in Las Vegas.

What incentives do media executives have for creating a candied reality instead of offering unvarnished news of the day? Well, if news is to serve corporate profits, its job is to attract eyeballs rather than inform. Take current CNN chief, Jeff Zucker. Formerly the head of NBC Entertainment, Zucker played a major role in creating NBC’s The Apprentice, coordinating with Trump to create a show “built as a virtual nonstop advertisement for the Trump empire and lifestyle.”  Zucker rode Trump’s celebrity up through the ranks at NBC. At the helm of CNN, he continued to profit from Trump and, by extension, helped create a media landscape in which Trumpist falsehoods could prevail.

News was the original “reality TV.” Now American media have corrupted the very idea of the real. Kim Kardashian is now “truer” than Wolf Blitzer. The New York Times (formerly “real”) describes reality as much as ABCnews.com.co (formerly “fake”). Gary Busey’s apprenticeship on Trump’s TV show is as real as Mitt Romney slavishly interviewing for Secretary of State.

The point? We should stop watching TV news. Just stop. Not because “reporters are biased.” Not because media owners have political agendas. We should because they do not offer news. They offer shiny packages to us and then sell our views and clicks. The shine matters more than truth. Anger and laughs over thought and insight. Profits matter more than an informed electorate. Ratings fuel Jeff Zucker’s shameless direction of CNN content. If we pay our attention, they will feed us more to get paid. Stop paying.

Postman said TV was dangerous nonsense in the 1980s. Turns out he was right about 2020. The good news? We don’t have to put up with it or deal with the messy business of resurrecting dead news icons. America may have voted, but we can still take action . . . or inaction.

Stop paying TV news attention. Starve the beast that is sustained by enslaving your mind. Demand better. You’ll be better for it; America might, too.

iankivelindavis I am a communication scholar interested in the role of foreign media in the United States. Also cake.
Published December 1, 2016December 5, 2016