The first interpretation is rooted in a predictable Western response to government-funded news: RT is nationalist propaganda. There are less accusatory labels for Russia’s effort like “public diplomacy” and “nation branding,” but at root they all place Russian motivations at the center of understanding RT. Foreign influence is bad for democracy.

The second view of RT is a bit less obvious. RT is simply good independent journalism in the best Western traditions of an antagonistic press, a press that “comforts the afflicted and afflicts the comfortable.” RT contributes to pluralism in our media system, and having many perspectives is good for democracy.

Should we view the media outlet as foreign propaganda? Or should we look at the often critical reporting as news with extraordinary independence?

I argue that the critical agenda of RT’s operation in Paris or Washington, D.C. should be distinguished from the domestic press. If for no other reason, the fate of mainstream domestic media is tied to the maintenance of many domestic institutions, economic, social and otherwise.

The two interpretations of RT.

The geopolitical rivalry of the US and Russia may seem to preclude any view of RT as a source for good journalism. Advocates for RT-as-propaganda point to RT’s critical coverage of the Russia government, Putin or Moscow’s foreign policy. There is none. RT burnishes Russia’s image as a powerful and innocent international force. Likewise, RT’s reporting on geopolitical conflicts significant to Russian interests follow the foreign policy du jour in the Kremlin. Such coverage predictably supports the Russian government’s view of, for example, militant Crimean separatists as a defense of ethnic Russians in Ukraine. There may be no glorifying pictures of Putin on horseback, but RT uses subtler forms of persuasion in the Western-styled presentation of news. Thus, the news channel has unavoidable bias in its portrait of international events and should be considered propaganda.

Those who view RT as journalism are not naively taken in by this ruse. RT’s defenders are often clear-headed about the intentions of the channel but express sympathy for RT’s mission to counterbalance a global news agenda largely driven by American and British news producers (CNN and BBC). Russian officials, they understand, chafed against the Anglo-American domination of the global news agenda and sought balance by replicating Western news production styles to offer stories under-reported by Western news agencies. If Reuters, AP, The New York Times and CNN reflected Anglo-American geopolitical interests, it is only fair that news consumers had access to alternative worldviews. According to this logic, RT completes our picture of world events.

The view of RT-as-journalism is a bit counter-intuitive but has merit. Many of RT’s defenders are quick to point out “bias” in American news. Reliance on official sources make national reporters reluctant to alienate office holders. Some media companies seek favorable regulatory conditions from an administration’s FCC and offer themselves as message vehicles for patrons. Sinclair Broadcasting may be a strong example of this quid pro quo media politicking. Reliance on advertisers introduces another set of pressures on editorial boards. The list of compromising conditions for news industry professionals is long and challenges more rosy pictures of the intrepid journalist speaking truth to power.

News critics aware of these vices in American journalism want an antagonistic press with true independence. Beyond critics, portions of the American public, too, agree with President Trump’s frequent shots at the press. Indeed, Trump’s victory may have hinged on casting clouds of doubt over mainstream press organs like CNN. This growing body of “woke” news consumers is part of a trend in American public opinion, a trend of skepticism. Simply, Americans show a waning faith in domestic, corporate news. A glance at the history of Gallup Poll public opinion numbers shows a declining faith in “the mass media” as a neutral source of information. 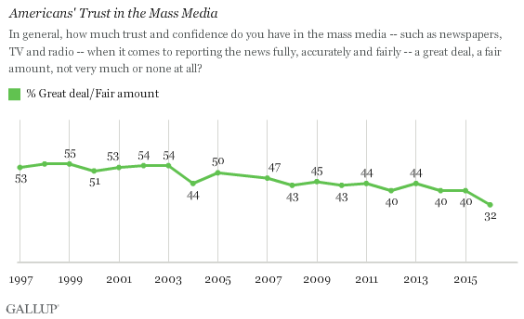 At once, we see a countervailing trend in how Americans appreciate their news sources. Those who disregard media at large as biased or fake will often praise the news channel they regularly use as an objective source of information about the world. We see an analogous Gallup trend in public views of Congress. Much like members of the public will give “Congress” low scores yet praise their district’s Congressional representative, Americans tend to hate “media” but love their channels.

Despite the downward trends in Americans’ regard for news media, many argue that we should hate the press. At least a little. A contentious press system that holds those in power to account and offers a range of opinions should anger and delight different groups of the public. If it did not, it would not be fulfilling its mission in a pluralist democracy. Journalism worthy of the name should occasionally attack, pillory and shame public figures and American culture.

Even if we appreciate a vicious watchdog press, we still must make distinctions between domestic and foreign media to appreciate RT’s role in the American media landscape. A thought experiment may help. If, for example, French political culture is significantly destabilized by events (terrorism, social strife, economic failures), Le Monde could reasonably be expected to report on contentious issues with the aim of re-stabilization. As domestic journalism, Le Monde is invested in the maintenance of French society and, given significant disruption, the paper would report in a way that sought a return to the status quo or normal economic, political and social French life. After all, “normal” French life has sustained Le Monde’s business model. The same can be said for The Washington Post and NBC Nightly News. The aim is not destruction of institutions but reform.

Not so with RT. Safely distant from Paris and Washington, RT can practice a sort of journalism of pure criticism, highlighting fractures and conflicts with little regard for clarification of debate and resolution. It is the difference between harsh criticisms from a family member versus a stranger in the street. One has an investment in you and your future. The other does not.

How we handle these new players in global media today will chart a path. This path can lead us out of a parochial age of national news and forge links across national boundaries. Pessimistic readers will see propaganda and hostile foreign powers seeking geopolitical advantage in news-diplomacy. Idealists envision a sort of global public sphere developing. Regardless, the path will be shaped by policy choices today.

iankivelindavis I am a communication scholar interested in the role of foreign media in the United States. Also cake.
Published August 24, 2017September 20, 2017