“Evil in the sight of this Sun”

iankivelindavis in Fiction, Uncategorized April 2, 2018February 7, 2022 1,137 Words
But Love has pitched his mansion in
The place of excrement

Best stories in the emerging genre of Hick Lit.

Chapter 1: Strangers in a strange land

In the months before Clayton’s death, we had begun to feel safe. Even superior to the normals in town. We felt the freedom of the woods.

He died here. In the woods. Among the sticks and stones. Fell through the dark near 70 feet, we estimated. You could see the flaring burn of his cigarette lofting in an arc out over the ravine like a swooping firefly. Then a rapid, straight descent. More like a meteor shooting toward the earth. They said he was dead on impact, but Jessica had cradled his head after we all sprinted down the dark hillside dodging tree trunks in our rush. She said the paramedics were lying to us. She said she wiped the blood away and looked into his eyes.

The ravines of southern Illinois marked the end of the last ice age. Glaciers, we were told, pushed south from the poles in some achingly slow geologic process and rippled the earth in an icy advance. The effect was like corrugating the land with irregular peaks and valleys.

This history left portions of the famously flat American prairie with low-elevation but sharp-angled slopes that funneled summer rains down brush-choked hillsides into rivulets which, in turn, poured into Kickapoo Creek. Each flow paid tribute. The Kickapoo to the Embarras River. Embarras to the Wabash. Wabash to the Ohio. On to the Mississippi. The Mississippi to the far off ocean.

Every time he drank enough, Devin would get serious about building a small armada of canoes and kayaks to float the entire tributary river system to New Orleans and out into the gulf.

“Imagine it. It would be easy to mount Matt’s picnic table on sealed barrels. The barrels are out at Jesse’s farm. They are just sitting out there rusting. Jesse’s dad wouldn’t care. Make em airtight, lash em to the legs and have a communal spot for gear storage and eating together without having to go to shore.”

Seven of us of sat drinking after clearing brush from some forest line. Leaf had designed an open-air shelter and enlisted us to help cut away the nettles and blackberry bushes that had overtaken the plot. We were sweat drenched and full of holes from the thorny detritus we had moved to the burn pile.

Luke laughed. “Look at Huckleberry over here,” gesturing to Devin. “Gonna find himself a N*gger Jim and light out for the territory.”

I cringed, then gritted my teeth. Luke and I had talked about that word. He was normally good about not saying it. At least when I was in ear-shot.

“I’m quoting literature, man. You should dig that,” he said ingratiatingly.

Devin shut us up before I could say anything else. “Focus people. It’s possible. I’ve mapped it out. We could stop for supplies every two or three days like we do at Greenup when we go down the Embarras. What was that? Like five hours?”

“Six hours in late summer. Uh . . . Four and a half in spring,” Leaf piped up, raising his hand to his eyebrows to look up at the sunny sky.

Leaf was usually quiet. When he spoke, everyone listened. The kid had retained a speech impediment into his late teens despite the public school system trying to drill it out of him for years, but that did not affect the respect everyone had for him. At least the country folks. People in town were less forgiving. He was rarely showered and had a wardrobe one would expect from a reclusive serial bomber. But Leaf lived in the country and he knew the rivers. He knew the wilderness better than most of us. Luke, Tully and Deb knew it too. I didn’t know shit. I was the cityboy they tolerated because they could tell I loved the woods. I only felt accepted after Leaf taught me to juggle the burning coals of a dying fire.

Devin went on, emboldened by Leaf. “Fuck yeah. I’m telling you guys. We could do it. It would be epic. After Greenup, we could stop in Newton. We’ve got New Liberty, The Chauncey Preserve, and Lawrenceville for stops too. Once we are on the Wabash, I’ve got a cousin in Mount Carmel. We can set up on his property for a couple of days.”

“Do you have any relatives once we are on the Mississippi?” Deb’s tone was incredulous. You could almost feel her eyes rolling in how Deb punctuated her words. She often played the skeptic when Devin got on his flights of fancy. Where Devin was loud and blunt, Deb was thoughtful and incisive. “Is every farmer gonna be happy to see a long-haired drunk like Luke wandering onto his land from the river?” 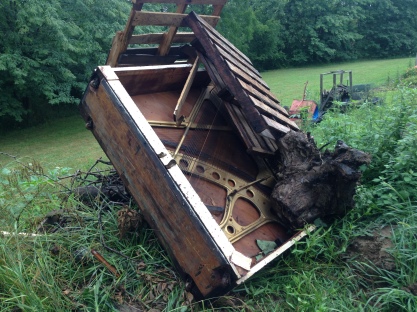 “We could find something,” Leaf said. “There’s a lot of beach along the wriver banks. And there arwe small islands where no one would bother us with plenty of driftwood for fiwres.”

“Easy,” Devin went on. “Once we get to bigger water, we could fish for food rather than having to go into town all the time.”

“We can’t fish for beers, brotha. Beers cost money.” Luke was giving the idea more thought than he had in the past. He threw the can he had just emptied into the mound of unburnable trash. An old two-by-four with the words “RECYCLE ONLY!” burn-etched was nailed to the tree nearby.

“Hell,” I said. “We could get sponsorship. Some kayak company that wants a bit of good press.” No one responded. I realized right away that had violated the spirit of the trip we were imagining. “I’m just saying we could make the trip less expensive. It’s gonna cost money.”

“Not really,” Devin said dismissively. “Sandwiches and the occasional 24-pack of Miller High Life would be our main expense. My tent and Luke’s could fit 10 people easy.”

As evening came on, we watched the fire grow brighter. Devin took to adding to the burning brush and then taking a running leap over. Luke’s brother had mysterious, clear whiskey that smelled like nail polish remover but burst like a flame thrower when he spit mouthfuls at Devin’s fire. Leaf and I tossed smoking embers back and forth. An evening moon appeared as if hastening the sun’s departure.

iankivelindavis I am a media researcher interested in the role of non-Western media in the United States. Also cake.
Published April 2, 2018February 7, 2022

2 thoughts on ““Evil in the sight of this Sun””