Zero-rating and Network Favoritism: the beginning of the end of Network Neutrality

Network Neutrality and the problem of zero-rating

Anyone note the explosion of advertising for free access to content like Spotify or Netflix? This T-Mobile ad samples TV so much it could be mistaken for a Netflix promotion. But if we look past the smiling shots of our favorite TV characters high-fiving, we see the first signs of what life on the web will be like after Network Neutrality.

It is no coincidence we see these offers in the wake of weakened Network Neutrality principles. This practice, “zero-rating,” is a clear example of what NN advocates have feared. Zero rating is the practice of creating partnerships with content providers like Netflix and making access to content from certain providers cheaper. Those who control the network get to play favorites in choosing the content flowing through their “pipes.” In short, not everyone trying to reach users/customers is treated equally.

How is this anti-competitive? Imagine we want to launch a music service to compete with Spotify. We have a good tech team that worked hard developing a friendlier user interface and faster file access for the consumer. Spotify’s deal with T-Mobile means our start-up music service, regardless of our app’s superiority, will likely fail. Why? Incumbent market advantages:

All of these factors add up to tall barriers to entry for competitors. By preferring Spotify’s content over others, network owners will effectively pick and choose winners while stifling innovative startups. And what is the likelihood that T-Mobile will allow a Spotify competitor to use the T-Mobile network?

This glimpse of a post-Network Neutral internet shows how anti-competitive the legal environment can become. It is a sharp contrast with the early (network-neutral) internet that allowed a young Netflix to challenge cable providers. Even seemingly innocuous Netflix package deals could be harbingers of a significantly less competitive industry in which consumers and startups ultimately lose. 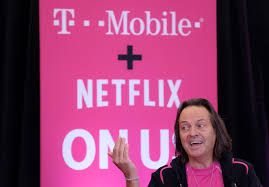 Despite the upbeat Netflix vignettes, these growing and merging media companies are not friendly giants. Zero-rating is a first stage of dramatic changes in store for a post-NN world. Network Favoritism of this sort dampens the industry’s ability to produce innovations and removes incentives to improve customer services. Without Network Neutrality, we risk more concentration in ownership and the development of distribution-content trusts. These trusts are more likely to stifle innovation.

Internet service providers like Comcast argue they would suffer unfair market disadvantages, but Comcast’s position on NN is contorted. As T.C. Sottok noted in The Verge, Comcast’s incoherent NN policy goes something like: “We respect and abide by NN principles and that is why we want them removed.” It begs the simple question: If the company appreciates NN, why petition to change FCC rules?

Public relations speak has made Comcast’s position nonsense, but policymakers have maps for navigating these waters. Nineteenth century Americans fought the Standard Oil monopoly because trusts and monopoly violated American ideas of capitalism. Concentration led to market dysfunction and harmed the economy at large. Early in the 20th century, AT&T had bought up most of the nation’s phone networks but accepted substantial government regulation in exchange for becoming the nation’s sole telephone company. AT&T owned all the market and Americans had public interest (9-1-1, fair rates, equal access) hardwired into US telecommunications system.

Standard Oil’s J D Rockefeller was a strict, church-going man. Reporters of the era noted that he taught Bible school on Sundays, but, by Monday, he was as ruthless a business mogul as the Gilded Age could produce. Disney may have the veneer of progressive ice princesses and dancing tea sets, but the media business is, well, business.

As the Department of Justice weighs media merger proposals from some of the most lucrative companies in history, let’s consider the arguments for continued ownership concentration in media businesses. What are some rationalizations for allowing fewer and fewer companies produce the content and control the “pipes” that deliver TV and the internet?

Comcast and similar powerful Internet Service Providers (ISPs) will talk about how limiting mergers will put them at an competitive disadvantage and harm profits. Executives often praise business efficiencies to justify concentration of media ownership. If these points fail to persuade, companies argue innovation will shrivel unless regulation X goes away. But these are fraudulent premises. In fact, innovation may be the first casualty in an merger-acquisition feeding frenzy, but let’s address each point.

To the second point, greater efficiency in service delivery is only a good thing if it does more than create value added for a company’s board of investors. The real question is how can specific efficiencies benefit actual consumers? There is little chance that cost-saving improvements in production or distribution would translate to less expensive cable packages like a la carte pricing structures.

No. Such efficiencies are ignored. Why? Corporate incentives focus on the needs of big dollar investors. “Value added” for the consumer is not what merger advocates have in mind. This is why improving services to the general public is secondary to shareholder returns.

The principal way to reduce costs for consumers is direct competition. Merger-produced efficiency without meaningful competition does nothing to keep consumer price points down. Yet, policymakers have consistently favored big media getting bigger by gobbling up potential rivals. Since the deeply flawed decision to allow Comcast to buy up NBC/Universal in 2011, the floodgates have opened.

Since 2011, the reasoning from media industry lobbyists is rich with irony: “Other companies need to compete with the new scale of the newly empowered Comcast, so allowing our merger proposals is necessary to maintain competition.” The giants wrestle while the rest of us, potential market competitors and consumers, are crushed in the brawl.

So, the DOJ and the Federal Communication Commission don’t appear poised to prevent the cascade of merger and acquisitions in American media (with exceptions). And now a toothless Network Neutrality policy has create a legal petri dish for anti-competitive strategies.

Comcast is emerging as the giant of our era. What’s missing is the legal framework that made earlier monopolies and oligopolies functional (see Susan Crawford’s excellent work). In many ways, this 21st century battle over communications is scarier than the battle over Standard Oil. Oil powered an industrial boom. ISPs control what we see and hear. Media institutions are tightly woven into American democracy and an informed citizenry. But will this debate play out in a substantial way on NBC nightly news?

iankivelindavis I am a media researcher interested in the role of non-Western media in the United States. Also cake.
Published December 29, 2017July 5, 2018